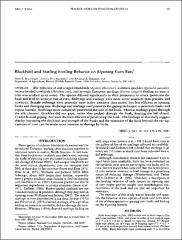 The behavior of red-winged blackbirds {Agelaius phoemcei/s), common grackles (Quiscalus quiscula), brown-headed cowbirds (Molothrus ater), and juvenile European starlings (Sturnus vulgaris) feeding on ears of corn was studied in an aviary. The species differed significantly in their propensity to attack (penetrate the husk and feed on kernels) ears of corn. Redwings and starlings were more active attackers than grackles and cowbirds. Female redwings were generally more active attackers than males, but less efficient at opening husks and damaging ears. Redwings and starlings used primarily the gaping technique to penetrate husks and expose kernels. Redwings more commonly penetrated the side of the husk, whereas starlings gaped through the silk channel. Grackles did not gape; rather they pecked through the husk, keeping the bill closed. Cowbirds used gaping, but were the least efficient at penetrating the husk. The findings of this study suggest that by increasing the thickness and strength of the husks and the extension of the husk beyond the ear tip, varieties of corn can be made more resistant to damage by birds.