Effects of Alparazolam and Triazolam on Isolation-Induced Aggression in Rats 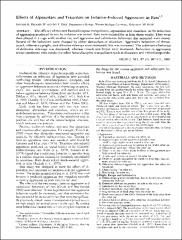 The efficacy of two new benzodiazepine tranquilizers, alprazolam and triazolam, in the reduction of aggression produced in rats by isolation was tested. Rats were isolated for at least three weeks. They were then placed in a cage with another rat, and aggressive and submissive behaviors that occurred were noted. Several of the behaviors were changed by either alprazolam or triazolam. Aggressive behaviors of thrust, attack, offensive upright, and offensive sideways were decreased; bite was increased. The submissive behavior of defensive sideways was decreased, whereas crouch and freeze were increased. Reduction in aggression seems consistent with results for other benzodiazepine tranquilizers such as diazepam and chlordiazepoxide.