Butterflies that are Endangered, Threatened, and of Special Concern in Ohio 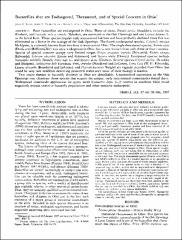