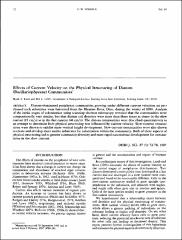 Diatom-dominated periphyton communities growing under different current velocities on precleaned rock substrates were harvested from the Maumee River, Ohio, during the winter of 1980. Analysis of the initial stages of colonization using scanning electron microscopy revealed that the communities were compositionally very similar, but that diatom cell densities were more than three times as dense in the slow current (15 cm/s) as in the fast current (40 cm/s). The diatom communities were described quantitatively in an attempt to determine how physical structuring was influenced by current velocity. Slow-current communities were shown to exhibit more vertical height development. Slow-current communities were also shown to create and develop more usable substrates for colonization within the community. Both of these aspects of physical structuring led to greater community diversity and more rapid successional development for communities in the slow current.