A Nine-Year Study of the Lepidoptera of The Wilderness Center, Stark County, Ohio 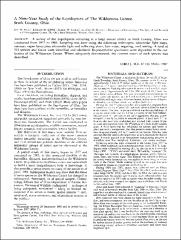 A survey of the Lepidoptera occurring at a large nature center in Stark County, Ohio was conducted from 1977 to 1985. Sampling was done using the following techniques: ultraviolet light traps, mercury vapor lamp plus ultraviolet light and collecting sheet, bait traps, sugaring, and netting. A total of 511 species and forms were identified and tabulated. Representative specimens were deposited in the collection of the Wilderness Center. Where adequately documented, the current status of each species was described.