Xylem Feeding by Periodical Cicada Nymphs on Pine and Grass Roots, With Novel Suggestions for Pest Control in Conifer Plantations and Orchards 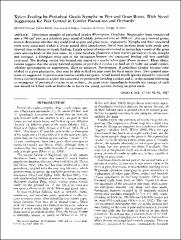 First-instar nymphs of periodical cicadas (Homoptera: Cicadidae: Magicicada) were introduced into a 500-cm2 plot in a relatively pure stand of loblolly pines and into an 1800-cm2 plot on a mowed grassy lawn to determine whether they could feed on pine and grass roots, respectively. Nymphs and their associated roots were excavated within a 2-year period after introduction. Serial root sections from both study sites showed clear evidence of cicada feeding. Cicada salivary sheaths terminated in metaxylem vessels of the grass roots and tracheids of the pine roots. In a pine-hemlock plantation where mature periodical cicada nymphs had emerged, a fiberglass resin cast of the emergence burrow and associated feeding cell was carefully excavated. The feeding rootlet was located and traced to a nearby white pine {Pinus strobus). These observations suggest that the newly hatched nymphs of periodical cicadas can feed on virtually any small rootlet, whether gymnosperm or angiosperm, dicot or monocot. Furthermore, if periodical cicadas become established in a pine plantation, they may be able to feed on pine roots for their entire lives. Two control measures are suggested: 1) prior to a periodical cicada emergence, broad-leaved woody species should be removed from a conifer plantation to prevent successful oviposition by invading cicadas; and 2) in the autumn following an emergence of periodical cicadas in an orchard, the grass cover immediately beneath the canopy of each tree should be killed with an herbicide to starve the young nymphs feeding on grass roots.