Plecoptera of the Ohio River: Community Composition and Species Phenologies of Nymphs Collected Near Cincinnati, Ohio 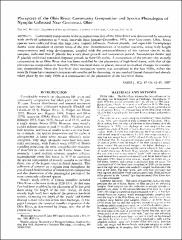 Community composition of the nymphal stoneflies of the Ohio River was determined by sampling with artificial substrates at 5-week intervals from January-December, 1979, near Cincinnati, Ohio. Seven species were collected from this large river. Isoperla bilineata, Perlesta placida, and especially Taeniopteryx burksi were abundant at certain times of the year. Determinations of nymphal maturity, using body length measurements and wing development, coupled with the presence/absence of the various species in the samples, indicated that P. placida has a very short growth and maturation period. Taeniopteryx burksi and P. placida exhibited extended diapause periods in their life cycles. A comparison of the present-day stonefly composition in an Ohio River that has been modified by the placement of high-level dams, with that of the plecopteran composition in the early 1930s (low-level dams in place), showed no marked changes in community composition. Since the low-level dam navigation system was completed in the late 1920s, either the stonefly fauna has remained comparatively unaffected by damming, or any marked faunal changes had already taken place by the early 1930s as a consequence of the placement of the low-level dams.