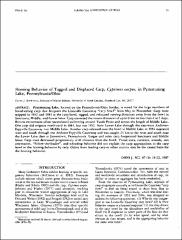 Pymatuning Lake, located on the Pennsylvania/Ohio border, is noted for the large numbers of bread-eating carp that frequent the Linesville Causeway carp bowl from May to November. Carp were trapped in 1952 and 1984 at the carp bowl, tagged, and relocated varying distances away from the bowl in Sanctuary, Middle, and Lower lakes. Carp traversed the return distances of up to 9 km in less than 4 or 5 days. Return movements often necessitated swimming around Tuttle Point and across the length of Middle Lake. One carp did migrate northward in 1984, but not 1952, from Lower Lake through the east-west Andover-Espyville Causeway into Middle Lake. Another carp released near the bowl in Middle Lake in 1984 migrated west and south through the Andover-Espyville Causeway and was caught 23 km to the west and south near the Lower Lake dam at Jamestown, Pennsylvania. Larger and older carp frequented Sanctuary and Middle lakes. Carp sizes decreased progressively with distance from the bowl. Visual cues, currents, sounds, sun orientation, follow-the-leader, and schooling behavior did not explain the carp aggregations in the carp bowl or the homing behavior by carp. Odors from feeding carp or other sources may be the causal basis for the homing behavior.