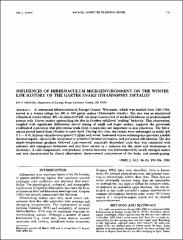 A communal hibernaculum in Portage County, Wisconsin, which was studied from 1981-1984, served as a winter refuge for 200 to 300 garter snakes (Thamnophis sirtalis). The den was an abandoned cylindrical cistern (about 100 cm diameter X 245 cm deep) constructed of stacked fieldstone in predominantly porous soils. Garter snakes approaching the den in October exhibited trailing behavior. This observation, coupled with significant differential arrival timing of small and larger snakes, supports the previously established contention that pheromone trails from conspecifics are important in den relocation. The hibernation period lasted from October to early April. During this time, the snakes were submerged in acidic (pH 5.5— 6.0), hypoxic (dissolved oxygen=2.9 ppm) well water. Sustained winter submergence provided a stable thermal regime, allowed the occupation of preferred thermal microsites, and prevented dehydration. The den depth-temperature gradient followed a pronounced, seasonally dependent cycle that was correlated with entrance and emergence behaviors and may have served as a stimulus for the onset and termination of dormancy. A cold temperature, anti-predator, defense behavior was demonstrated by newly emerged snakes and was characterized by cloacal elimination, dorso-ventral compression of the body, and mouth-gaping.