Changes in an Ohio Prairie Soil as the Result of Cultivation 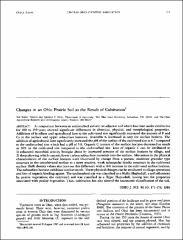