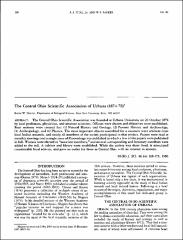 The Central Ohio Scientific Association was founded at Urbana University on 20 October 1874 by local professors, physicians, and amateur scientists. Officers were chosen and objectives were established. Four sections were created for: (1) Natural History and Geology, (2) Pioneer History and Archaeology, (3) Anthropology, and (4) Physics. The most important objects assembled for a museum were artifacts from local Indian mounds, and nearly all members of the society participated in that project. Papers were read at monthly meetings and a single issue of Proceedings was published in which a few of the papers were published in full. Women were elected as associate members, and several corresponding and honorary members were added to the roll. A cabinet and library were established. While the society was short lived, it stimulated considerable local activity, and gave an outlet for those in Central Ohio with an interest in science.