Reproductive Performance and Condition of White-Tailed Deer in Ohio 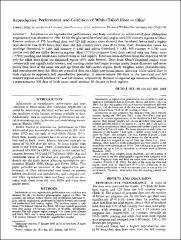 Information on reproductive performance and body condition in white-tailed deer (Odocoileus virginianus) was obtained in 1981-83 for the glaciated farmland and unglaciated hill country regions of Ohio. Uterine analysis of 275 farmland does and 129 hill country does showed that farmland fawns had a higher reproductive rate (0.85 fetus/doe) than did hill country fawn does (0.62 fetus/doe). Fetuses:doe ratios for yearlings (farmland = 1.89, hill country = 1.84) and adults (farmland = 1.85, hill country = 1.78) were similar and did not differ between regions. Most (>75%) pregnant fawn does carried only one fetus; most (>70%) yearling and adult does carried twins or had triplets. Fetal sex ratios differed from the expected 50:50 only for adult does from the farmland region (40% male fetuses). Does from Ohio's farmland region were consistently and significantly heavier, and yearling males had larger average antler beam diameter and more points than deer of the same sex and age from the hill country region. Body weights, antler characteristics, and reproductive rates for Ohio are typical of deer on a high nutritional plane, allowing white-tailed deer in both regions to approach full reproductive potential. A representative 100 does in the farmland and hill country regions could produce 147 and 140 fetuses, respectively. Because of regional age structure differences, a representative 100 deer of both sexes could produce 83 fetuses in both regions.