Aspects of the Life History of the Tadpole Madtom, Noturus gyrinus (Siluriformes: Ictaluridae), in Southern Illinois 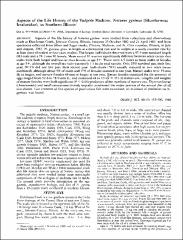 Aspects of the life history of Noturus gyrinus were studied from collections and observations made at Dutchman Creek, Johnson County, Illinois, between 25 October 1982 and 21 April 1984, and from specimens collected from Silver and Sugar creeks, Clinton, Madison, and St. Clair counties, Illinois, in July and August, 1982. N. gyrinus grew in length at a decreasing rate and in weight at a nearly constant rate for at least three (females) or four years (males). The largest individuals observed were a 97.5-mm standard length (SL) male and a 78.1-mm SL female. Mean annual SL was not significantly different between sexes except that males were both longer and heavier than females at age 3 + . There were 4.5 times as many males as females at age 3+, although the overall sex ratio was nearly 1:1 in the total sample. Only 29% survived past their first year; 90.5% did not live past their second year. Individuals (78%) usually matured in two years (sexes combined), although about 5% of males and 17% of females matured in one year. Mature males were 55-mm SL or longer, and mature females 48-mm or longer at one year. Mature females examined for the presence of eggs ranged from 52.6 to 78.9-mm SL, and contained 48 to 323 (x = 151.3) mature ova. Lengths and weights of mature females 'were both significant (P < 0.05) predictors of the numbers of mature ova. Dipteran larvae (chironomids) and small crustaceans (mainly isopods) constituted the major portion of the annual diet of all size classes. Gut contents of five species of piscivorous fish were examined; no evidence of predation on N. gyrinus was found.