The Evolution-Creation Controversy: Opinions from Students at a “Liberal” Liberal Arts College 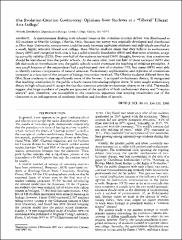 A questionnaire dealing with selected issues in the evolution-creation debate was distributed to 362 students at Oberlin College, Oberlin, Ohio. Because the survey was originally developed and distributed at Ohio State University, comparisons could be made between university students and individuals enrolled in a small, highly selective liberal arts college. Most Oberlin students claim that they believe in evolutionary theory (89%) and recognize both that it has a solid scientific foundation (88%) and that most scientists accept its scientific validity (92%). Over one-half of the students surveyed (56%) thought, however, that creationism should be introduced into the public schools. At the same time, over one-half of those surveyed (60%) also felt that such an introduction into the public schools would constitute the teaching of religious principles. A very small fraction of the respondents had a sophisticated view of evolution (7%), but many (68%) were able to identify various components of natural selection. Evolutionary sophistication and rejection of creationism increased as a function of the amount of biology instruction received. The Oberlin students differed from the Ohio State students in that significantly more of the former: 1) accepted evolutionary theory; 2) recognized that teaching creationism in the public schools means introducing religion there; 3) were taught evolutionary theory in high school; and 4) accept the fact that scientists consider evolutionary theory to be valid. The results suggest that large numbers of people are ignorant of the specifics of both evolutionary theory and creation science and, therefore, are susceptible to the creationist argument that keeping creationism out of the classroom is an infringement of academic freedom and freedom of speech.