Miospore Zonation in the Brookville (No. 4) Coal (Pennsylvanian) of Ohio 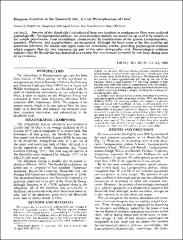 Samples of the Brookville Coal collected from two localities in northeastern Ohio were analyzed palynologically. Laevigatosporites globosus, the most abundant species, accounted for up to 85% by number of the sample populations. Four assemblages, characterized by combinations of the genera Laevigatosporites, Lycospora, Florinites, and Acanthotriletes, are recognized. Although the basal zones at the two localities are somewhat different, the middle and upper zones are remarkably similar, providing palynological evidence which suggests that the two exposures are part of the same stratigraphic unit. Paleoecological evidence indicates that the Brookville was deposited in a swamp that was forested primarily by tree ferns during most of its existence.