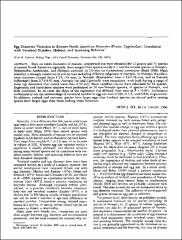 Data on mean diameters of mature, unspawned ova were obtained for 12 genera and 71 species of eastern North American cyprinids. Sizes ranged from approximately 0.7 mm for several species of Notropis, Hybognathus hankinsoni, and Hybopsis aestivalis to 2.0 mm for Campostoma anomalum (Reed 1958). Mean diameter is strongly conserved in several taxa including different subgenera of Notropis. In Notropis (Luxilus), mean diameter ranged from 1.24-1.41 mm, in Notropis {Hydrophlox) from 1.13-1.18 mm, and in Notropis (Alburnops) from 0.71-0.93 mm. Notropis (ss) and Cyprinella were exceptions, with both having a range of mean egg diameters that varied more than 0.50 mm. Mean vertebral counts were tabulated for 61 species. Regression and correlation analyses were performed on 20 non-Notropis species, 41 species of Notropis, and both combined. In all cases the slope of the regression line differed from zero at P < 0.001. Correlation coefficients (r) for the relationships of vertebral number to egg size were 0.930, 0.715, and 0.810, respectively. In addition, upland and montane species have larger eggs than lowland species; territorial and/or nesting species have larger eggs than those lacking these behaviors.