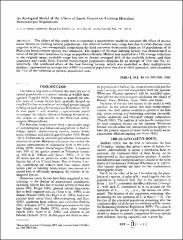 The object of this study was to construct a quantitative model to compare the effect of several exotic factors on limiting natural populations. The effect of habitat loss, range loss due to avian disease, feral ungulate activity, and interspecific competition for food resources from exotic birds on 33 populations of 16 Hawaiian honeycreeper species was examined. The impact of the four limiting factors was characterized in terms of the percent reduction in range or population density. Habitat loss resulted in a 74% average reduction in the original range; probable range loss due to disease averaged 46% of the available habitat; and feral ungulates and exotic birds lowered honeycreeper population densities by an average of 22% and 9%, respectively. The combined effect of the four limiting factors, which was modelled as their multiplicative product, represented an average loss of 89% in potential population size due to their operation, and accounted for 75% of the variation in present population sizes.