In Vitro Flouride Resistance in a Cariogenic Streptococcus 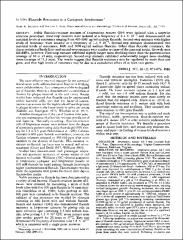 Author Institution: Department of Botany and Microbiology, University of Arkansas