The Marginal Nuclei in the Spinal Cord of Reptiles: Intraspinal Mechanoreceptors 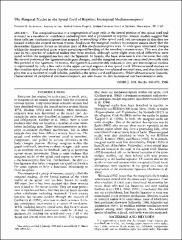 The marginal nucleus is a congregation of large cells in the lateral portion of the spinal cord and is found in a number of vertebrates including man and is prominent in reptiles. Recent studies suggest that these cells are mechanoreceptors that respond to stretching of the spinal cord, and are unique in that they are located within the central nervous system. Studies on the marginal nucleus in crotaline snakes show that the denticulate ligament forms an intimate part of this mechanoreceptive area. It undergoes structural changes within the intervertebral areas where stretching and bending of the vertebral column occur. This was also the case in two species of colubrid snakes that were studied, although some slight anatomical differences were noted within the marginal nucleus and the ligament. In lizards, the basic structure is also the same, but only the ventral portion of the ligament undergoes changes, and the marginal neurons are associated primarily with this portion of the ligament. In turtles, the ligament is considerably reduced in size, and the marginal nucleus is represented by only a few cells in the upper cervical regions of the spinal cord. Ultrastructural studies on the crotaline spinal cord show that the neurons extend dendrites into a lateral neuropil area, and that dendrites give rise to a number of small tubules, parallel to the spinal cord and ligament. Other ultrastructural features, characteristic of peripheral mechanoreceptors, are also found in this intraspinal mechanoreceptive area.