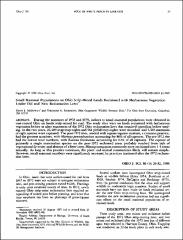 During the summers of 1978 and 1979, indices to small mammal populations were obtained in east-central Ohio on lands strip-mined for coal. The study sites were on lands reclaimed with herbaceous vegetation before or after enactment of the 1972 Ohio reclamation laws that required topsoiling before seeding. In the two years, 26,489 snap-trap-nights and 564 pitfall-trap-nights were recorded, and 3,403 mammals of eight species were captured. The post-1972 sites, seeded with a grass-legume mixture, a common practice, had the greatest numbers, with Microtus pennsylvanicus accounting for 86% of all captures. The pre-1972 site had the lowest total numbers, with Blarina brevicauda accounting for 62% of all captures. The capture of primarily a single mammalian species on the post-1972 reclaimed areas probably resulted from lack of vegetational diversity and absence of a litter layer. Mining companies commonly mow reclaimed sites 1-3 times annually. As long as this practice continues, the plant and animal communities likely will remain simple. However, small mammal numbers were significantly increased by practices instituted after the 1972 reclamation laws.