Longevity in the Drosophila virilis Species Group. I. The D. virilis Phylad 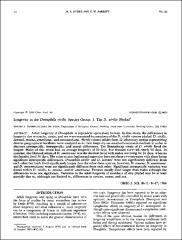 Adult longevity of Drosophila is dependent upon many factors. In this study, the differences in longevity due to species, strain, and sex were examined for members of the D. virilis species phylad: D. virilis, lummei, texana, americana, and novamexicana. Newly eclosed adults from 12 laboratory strains representing diverse geographical localities were analyzed as to their longevity on standard cornmeal medium in order to discover interspecific, intraspecific, and sexual differences. The Texmelucan strain of D. virilis lived the longest. Males of this strain had an average longevity of 69 days, but females survived nearly 90 days. In contrast, the Chinook strain of D. americana was the shortest-lived with males surviving for 24 days, whereas the females lived 34 days. The other strains had mean longevities between these two extremes with there being significant interspecific differences. Drosophila virilis and D. lummei were not significantly different from each other but both lived significantly longer than the other three species; however, D. texana, D. americana, and D. novamexicana were not significantly different from each other. Significant intraspecific variation was found within D. virilis, D. texana, and D. americana. Females usually lived longer than males although the differences were not significant. Variation in the adult longevity of members of this phylad may be at least partially due to, although not limited to, differences in species, strain, and sex.