Impact of Municipal Wastewater Effluent on Water Quality, Periphyton, and Invertebrates in the Little Miami River Near Xenia, Ohio 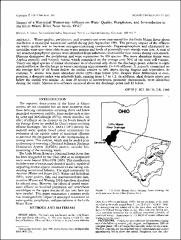 Water quality, periphyton, and invertebrates were determined for the Little Miami River above and below a municipal wastewater outfall during July-September 1984. The primary impact of the effluent on water quality was to increase nitrogen-containing compounds. Organosphosphate and chlorinated insecticides were non-detectable in any water sample and levels of potentially toxic metals were low. A total of 122 attached periphyton species were identified from substrates colonized for four weeks during each month. Diatoms dominated the periphyton and were represented by 106 species. The more abundant forms were Amphora perpusilla and Navicula minima which comprised on the average over 70% of the total cell volume. Thirty-one algal species of minor abundance were observed only above the discharge point, relative to eight restricted below the discharge in water containing approximately 15-35% effluent. A. perpusilla comprised on the average 80% of all forms below the outfall relative to 30% above during August and September. In contrast, N. minima was more abundant above (39%) than below (2%). Despite these differences in composition, a diversity index was relatively high, ranging from 1.7 to 3.2. In addition, algal density above and below the outfall was similar. At least 20 species of invertebrates, primarily chironomids, were identified during the study. Sixteen invertebrates occurred above the discharge point and 12 below.