Snail Distributions in Lake Erie: The Influence of Anoxia in the Southern Central Basin Nearshore Zone 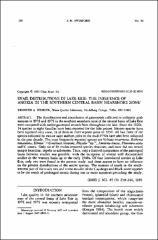 The distributions and abundances of gastropods collected in sediment grab samples in 1978 and 1979 in the southern nearshore zone of the central basin of Lake Erie were compared with earlier gastropod records from throughout the lake. Since the 1920s, 34 species in eight families have been reported for the lake proper. Sixteen species have been reported only once, 13 of them in three reports prior to 1950. All but three of the species collected by two or more authors prior to the mid-1950s have also been collected in the past decade. The most frequently reported species are Valvata trkarinata, Bithynia tentaculata, Elimia ( —Goniobasis) livescens, Physella sp., Amnkola limosa, Pleuroceraacuta and V. sincera. Only six of 19 studies reported species densities, and most did not record sample locations, depths or substrates. Thus, only a limited comparison of the gastropod fauna between studies was possible, with the exception of several well documented studies in the western basin up to the early 1960s. Of four introduced species in Lake Erie, only two were found in the present study, and these appear to have no influence on the present distributions of the native species. The absence of snails in the southwestern part of the study area and at the mouths of the Cuyahoga and Black rivers appears to be the result of prolonged anoxia during one or more summers preceding the study.