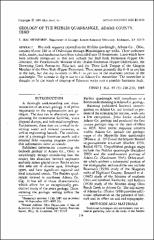 The rock sequence exposed in the Peebles quadrangle, Adams Co., Ohio, consists of over 240 m of Ordovician through Mississippian age rocks. These carbonate rocks, shales, and sandstones have been subdivided into 13 formations. Units which have been recently recognized in this area include the Bull Fork Formation (Upper Ordovician), the Preachersville Member of the Drakes Formation (Upper Ordovician), the Drowning Creek Formation (Silurian), and the Three Lick Tongue of the Chagrin Member of the Ohio Shale (Upper Devonian). These strata generally dip 6—8 m per km to the east, but the dip increases to 10—11 m per km in the southeast portion of the quadrangle. The increase in dip is due to the Adams Co. monocline. The monocline is thought to be the result of draping of Paleozoic rocks over a possible basement fault.