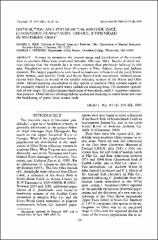 Surveys to determine the current status and distribution of the rosyside dace in southern Ohio were conducted between 1980 and 1982. Results of these surveys indicate that the rosyside dace is more common than previously believed in this area. Populations were recorded from 40 streams in Pike, Adams, Scioto and Jackson counties. The largest populations were found in headwater tributaries of the Little Scioto River system, and Sunfish Creek and Scioto Brush Creek watersheds. Isolated populations were found in several of the smaller tributary streams of the Scioto and Ohio rivers. Factors limiting populations of this species in southern Ohio streams appear to be primarily related to increased water turbidities resulting from: (1) intensive agriculture of row crops; (2) indiscriminate timbering of watersheds, and (3) highway construction projects. Other factors affecting habitat quality are terracing to create home sites and the bulldozing of gravel from stream beds.