Ammonium Production by Races and Mating Types of Bipolaris maydis and its Relationship to Mycelium Dry Weight, Sporulation and pH of the Culture Medium 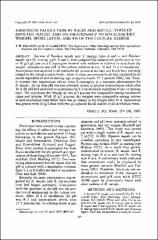 Isolates of Bipolaris maydis race T, mating types A and a, and Bipolaris maydis race O, mating types A and a, were compared for ammonium production at two or 10 g/l glucose on a L-asparagine-mineral salts medium in relation to mycelium dry weight, sporulation and pH of the culture medium at six, 10 and 14 d of incubation. Ammonium was detected in all media for all isolates at six days and levels were inversely related to the initial glucose levels. After 10 days, ammonium levels had increased in all media regardless of race or mating type to approximately 17.5 /umoles NH^/ml. Thus, it appears that ammonium release from L-asparagine is a common phenomenon for B. maydis. At six days pH was also inversely related to glucose concentration while after 10 d the pH had increased to approximately 8.2 on all media regardless of race or mating type. The mycelium dry weight on two g/l glucose was comparable among incubation times and isolates. With 10 g/l glucose, dry weights were comparable among isolates at each incubation time while there was no change in dry weight after 10 d. Sporulation was greater with 10 g/l than with two g/l glucose for all isolates at all incubation times.

Author Institution: The Department of Plant Pathology and the Ohio Agricultural Research and Development Center, The Ohio State University