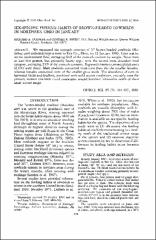 We examined the stomach contents of 57 brown-headed cowbirds (Molothrus ater) collected from a roost in Erie Co., Ohio, on 12 January 1983. Corn was by far the predominant food, averaging 66% of the stomach contents by weight. Seeds from at least five grasses, but primarily Setaria spp., were the second most abundant food category, averaging 21% of the stomach contents. Ragweed {Ambrosia artemisiifolia) seeds (2.6%) were third. Male cowbirds consumed more corn than did the smaller females, whereas females consumed more of the smaller grass seeds. The abundance of corn in harvested fields and feedlots, combined with mild winter conditions, probably were the primary reasons cowbirds could overwinter several hundred kilometers north of their usual winter range.