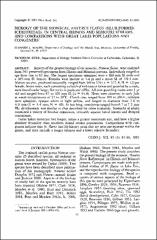 Aspects of the general biology of the stonecat, Noturusflavus, were analyzed from 261 preserved specimens from Illinois and Missouri streams. Individuals ranged in age from one to 62 mo. The largest specimens examined were a 180-mm SL male and a 165-mm SL female. Females were mature at 3-4 yr and a mean SL of 119.4 mm. Mature oocytes, produced seasonally, ranged from 189 to570(x = 377.8; N = 12) per female. Seven nests, each containing a clutch of embryos or larvae and guarded by a male, were found under large, flat rocks in pools and riffles. All nest-guarding males were 3 yr old and ranged from 87 to 105 mm SL (x = 94.8). Nests were observed in early July at water temperatures of 27 to 29°C. Clutch sizes ranged from 104 to 306+; embryos were spherical, opaque white or light yellow, and ranged in diameter from 2.6 to 4.0 mm (x = 3.4 mm; N = 40). At hatching, mesolarvae ranged from 6.7 to 7.5 mm TL; development was similar to that described for other ictalurids. Stomachs of adults contained a variety of benthic organisms, primarily aquatic larval insects and decapod crustaceans.