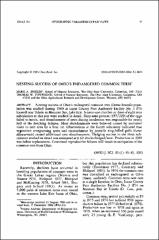 Nesting success of Ohio's endangered common tern (Sterna hirundo) population was studied during 1980 at Lucas County Port Authority Facility No. 3 (F3) located near Toledo in Maumee Bay, Lake Erie. Ninety-one clutches in three of eight tern subcolonies at this site were studied in detail. Sixty-nine percent (157/229) of the eggs failed to hatch, and abandonment of nests during incubation was responsible for nearly half of the hatching failures. Most abandonments were believed caused by nocturnal visits to nest sites by a feral cat. Observations at the fourth subcolony indicated that vegetation overgrowing nests and encroachment by juvenile ring-billed gulls (Larus delawarensis) caused additional nest abandonments. Fledging success in the three subcolonies studied in detail was estimated at 0.62 chicks fledged/nest. Production in 1980 was below replacement. Continued reproductive failures will result in extirpation of the common tern from Ohio.