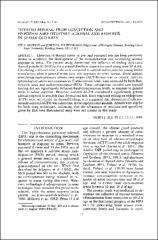 Elevation of thyroid status in pre- and postnatal rats has been previously shown to accelerate the development of the neuroendocrine axis controlling adrenal response to stress. The present study determined the influence of feeding desiccated thyroid powder (0.03%) in the maternal diet from conception until young were 30 d old. Circulating corticosterone levels were compared in control and thyroid-fed young before stimulation, after a general stress (one min exposure to ether fumes), direct adrenal stimulation (subcutaneous adrenocorticotropin (ACTH) injection) or control injection (physiological saline subcutaneously). Corticosterone levels were measured by both fluorometric assay and radioimmunoassay (RIA). These comparisons revealed that thyroid feeding did not significantly influence basal corticosterone levels, or response to general stress or saline injection. However, injected ACTH stimulated a significantly greater adrenal response in controls than thyroid-fed rats. Since responses relying on endogenous ACTH were not altered by thyroid feeding, it is suggested that absorption of subcutaneously injected ACTH was subnormal in the experimental animals. Results were similar for both assay techniques, indicating that the advantages of precision and specificity given by RIA over fluorometric assay were not critical in this study.