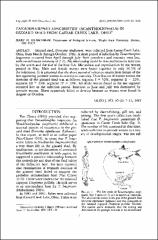 Gizzard shad, Dorosoma cepedianum, were collected from Caesar Creek Lake, Ohio, from March through October, 1982. A short period of infection by Tanaorhamphus longirostris occurred from April through July. Both prevalence and intensity were low, with overall mean intensity of 2.25. No relationship could be detected between infection by the worm and the size of the host fish. Maturation and reproduction by the worms peaked in May. Male and female worms were found together in only 14.5% of the infections. It is proposed that the short period of infection results from failure of the late-appearing juvenile worms to develop to maturity. Distribution of worms within the intestine of the gizzard shad was as follows: segment I = 52%, segment II = 22%, segment III = 13%, segment IV = 13%. All of the worms found in the last segment occurred late in the infection period. Infection in June and July was dominated by juvenile worms. These apparently failed to develop because no worms were found in August or October.