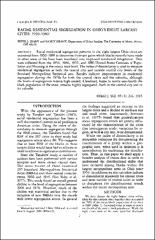 Author Institution: Department of Urban Studies, The University of Akron