Woodpecker Bills and Their Conformance to Hutchinsonian Ratios 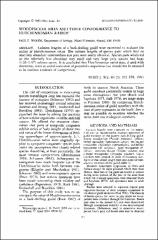 Culmen lengths of a bark-drilling guild were examined to evaluate the utility of Hutchinsonian ratios. The culmen lengths of species pairs which feed on relatively abundant intermediate size prey were nearly identical. Species pairs which fed on the relatively less abundant very small and very large prey species had large (1.35-1.47) culmen ratios. It is concluded that Hutchinsonian ratios may, if used with discretion, serve as useful indicators of potential competition but should not be assumed to be indirect evidence of competition.