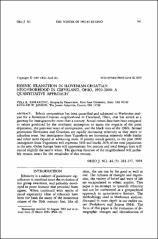 Ethnic composition has been quantified and subjected to Markovian analysis for a Slovenian-Croatian neighborhood in Cleveland, Ohio, that has served as a gateway for immigrants for more than a century. Actual census data have been compared to values predicted by the stochastic assumption to assess the impacts of the great depression, the post-war wave of immigration, and the black riots of the 1960s. Second generation Slovenians and Croations are rapidly decreasing relatively as they move to suburban areas, but immigrants from Yugoslavia are increasing relatively while blacks and other races expand at advancing rates. If present trends persist, in the year 2000 immigrants from Yugoslavia will represent 34% and blacks 26% of the total population in the area. Other foreign born will approximate five percent and total foreign born will exceed slightly the native white. The gateway function of the neighborhood will probably remain intact for the remainder of this century.