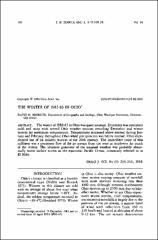 The winter of 1982-83 in Ohio was quite unusual. December was extremely mild and rainy with several Ohio weather stations recording December and winter records for maximum temperatures. Temperatures remained above normal during January and February throughout Ohio while precipitation was below normal. Ohio experienced one of its mildest winters of the 20th century. The immediate cause of this mildness was a persistent flow of the jet stream from the west or southwest for much of the winter. The ultimate generator of the unusual weather was probably abnormally warm surface waters in the equatorial Pacific Ocean, commonly referred to as El Nino.