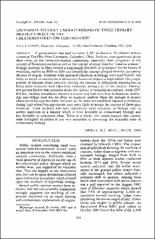 A questionnaire was used to survey 2,387 students in 10 different science courses at The Ohio State University, Columbus, Ohio. Students were questioned about their views on the creation/evolution controversy, especially their acceptance of the concept of Darwinian evolution and on the concept of equal time for creation science. Biology students in Ohio showed a surprisingly low level of acceptance for the theory of evolution, and by an 80%-to-20% rate favored the concept of equal time for competing theories of origins. Students with increased education in biology were significantly less likely to accept co-instruction of alternative theories of origins in high school. Only eight percent of students could correctly identify the concept of differential reproduction as being most consistent with Darwinian evolution, among a set of five choices. Twentyfive percent believe that scientists doubt the validity of evolution as a science, while 22% feel that teaching naturalistic theories of science may lead to a decay in American society. Age and college rank had no effect on students' answers when the amount of science education in biology was taken into account. Students who had been exposed to evolution during high school biology courses were more likely to accept the concept of Darwinian evolution. Those students who have experienced more education in biology tend to answer questions in a manner which is more favorable to evolutionary biology and less favorable to creationist ideas. Taken as a whole, the results suggest that current mass biological education is not very successful in conveying the scientific basis of evolutionary biology.