Early Ohio Botanical Collections and the Development of the State Herbarium 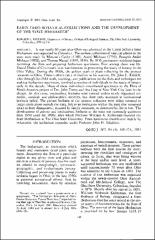 It was nearly 90 years after Ohio was admitted to the Union before a State Herbarium was organized in Columbus. The earliest collections of vascular plants in the state were made by Manasseh Cutler (1788), Andre Michaux (1793), Frangois Andre Michaux(1802), and Thomas Nuttall (1810, 1816). By 1810, permanent residents began recording the flora and preparing herbarium specimens. First among these was Dr. Daniel Drake of Cincinnati, who was foremost in promoting the study of botany in the Ohio Valley. During the 1830s, the golden years of plant collecting by the pioneer botanists in Ohio, Drake's efforts came to fruition in his student, Dr. John L. Riddell, who through his field work, teaching, and publications on the flora and techniques for making herbarium specimens, involved a number of individuals in the study of botany early in the decade. Many of these individuals contributed specimens to the Flora of North America project of Drs. John Torrey and Asa Gray of New York City later in the decade. At this time, institutional herbaria were formed within newly organized scientific, medical, and philosophical societies, but these early attempts at institutional herbaria failed. The private herbaria of the pioneer collectors were either donated to larger institutions outside the state, left to an institution within the state that remained small or later disappeared, retained by family members, or destroyed by fire or lost. The development of private and institutional herbaria in the state was extremely quiescent from 1850 until the 1890s, after which Professor William A. Kellerman founded the State Herbarium at The Ohio State University. From specimens contributed largely by volunteers, the herbarium expanded under Professor John H. Schaffner.