An Illustrated Key to the Ohio Cambarus and Fallicambarus (Decapoda: Cambaridae) with Comments and a New Subspecies Record 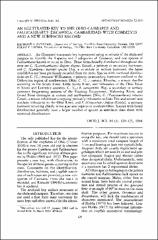 An illustrated taxonomic key is presented using structures of the chela and carapace to identify the 4 species and 2 subspecies of Cambarus, and one species of Fallicambarus known to occur in Ohio. Those forms broadly distributed throughout the state are C. (Lacunicambarus) diogenes diogenes Girard, a primary or secondary burrower; and C. (Cambarus) bartonii cavatus Hay, a secondary or tertiary burrower; the latter crayfish has not been previously recorded from the state. Species with restricted distributions are C. (C.) ortmanni Williamson, a primary or secondary burrower confined to the Ordovician region of southwestern Ohio; C. (C.) sciotensis Rhoades, a stream dweller occurring in the Scioto River, Little Scioto River, and tributaries of the Ohio River in Scioto and Lawrence counties; C. (C.) b, carinirostris Hay, a secondary or tertiary burrower frequenting streams of the Flushing Escarpment, Mahoning River, and Grand River drainages in eastern and northeastern Ohio; C. (Puncticambarus) robustus Girard, a stream inhabitant occupying primarily tributaries to Lake Erie and central and northern tributaries to the Ohio River, and F. (Creaserinus) fodiens (Cottle), a primary burrower occurring chiefly in the glaciated regions of northern Ohio. Species with broad distributions generally have a larger number of species as associates than those with restricted distributions.