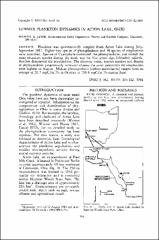 Plankton was quantitatively sampled from Acton Lake during July-September 1982. Eighty-two species of phytoplankton and 18 species of zooplankton were identified. Species of Cyanophyta dominated the phytoplankton, and overall the most abundant species during the study was the blue-green alga Schizothrix calckola. Rotifers dominated the zooplankton. The diversity index, species number and density of phytoplankton progressively increased whereas the same parameters for zooplankton were highest in August. Midday photosynthesis (carbon assimilation) ranged from an average of 20.7 mgC/m3/h in October to 100.4 mgC/m3/h during June.