Occupational Differentiation and Change in an Ohio Amish Settlement 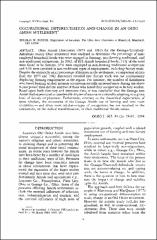 Ohio Amish Directories (1973 and 1982) for the Geauga-Trumbull-Ashtabula county Ohio settlement were analyzed to determine the percentage of male employed household heads who were engaged in farming, non-farming traditional, and non-traditional occupations. In 1982, of 891 Amish household heads, 31% of the total were found to be farmers, 37% were employed in non-farming traditional occupations and 32% were involved in non-traditional types of employment, including factory work. Despite the atypically small percentage of farmers in the settlement, a comparison of data from the 1973 and 1982 directories revealed that factory work was not continuously displacing farming employment in the region. For instance, the number of Amishmen who listed farming as their primary occupation actually increased more during the above 9-year period than did the number of those who listed their occupation as factory worker. Based upon both directory and interview data, it was concluded that the Geauga area Amish had experienced a considerable degree of success in culturally adapting to a given level of factory employment. Futhermore, contrary to the theoretical expectations of some scholars, the movement of the Geauga Amish out of farming and into more diversified — and often more secular — types of occupations has not resulted in the destruction, or the radical transformation, of their traditional Amish values.