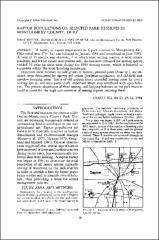 A survey of raptor populations on 8 park reserves in Montgomery Co., Ohio (total area 2731 ha) was initiated in January 1981 and completed in June 1983. A total of 15 species was observed, 7 of which were nesting species, 4 were winter residents, and 4 were casual observations only. An intensive census of the nesting species yielded 54 pairs on these areas during the 1983 nesting season, which is believed to accurately reflect the total breeding population. Important local habitats include groves of mature, planted pines (Pinus sp.), successional areas dominated by eastern red cedars (Juniperus virginiana), and old-field and meadow foraging areas. Tracts of old growth forest provided nesting areas for cavity nesting species and were particularly important where they interfaced with open habitats. The present abundance of these nesting and foraging habitats on the park reserves could account for the high concentration of nesting raptors utilizing them.