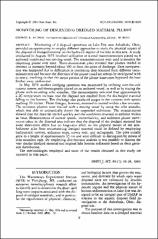 Monitoring of 2 disposal operations on Lake Erie near Ashtabula, Ohio, provided an opportunity to employ different approaches to study the physical impact of the disposal of dredged material on the hydraulic regime of the lake in this area. A study conducted in August 1975 involved utilization of several transmissometers placed on 4 anchored vessels and one moving vessel. The transmissometers were used to monitor the dispersing plume over time. Three-dimensional plots revealed that plumes tended to decrease in intensity beyond about 100 m from the point of discharge. Data interpretation was hampered due to difficulties in correlating data obtained from different transmissometers and because the direction of the plume could not always be anticipated with accuracy, resulting in that the major portion of the plume sometimes bypassed the boat further away undetected.