Spatial Variation in the Rates of Unemployment in Ohio By County, January 1981-July 1982 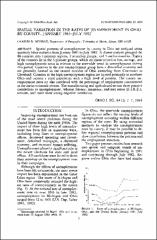 Spatial patterns of unemployment by county in Ohio are analyzed using quarterly labor statistics from January 1981 to July 1982. A cluster analysis grouped the 88 counties into 3 primary regions, 2 secondary groups, and 3 outlier counties. Eighty of the counties lie in the 3 primary groups, which are characterized as low, average, and high unemployment areas in relation to the statewide trend in unemployment during this period. Counties in the low unemployment group have a diversified economy and are generally located in the central corridor of Ohio extending from Cincinnati to Cleveland. Counties in the high unemployment region are located primarily in southern Ohio and contain a rural population with a high level of poverty. The county unemployment rates are also correlated with the percentage of employment concentrated in the major economic sectors. The manufacturing and agricultural sectors show positive correlations to unemployment, whereas finance, insurance, and real estate (F.I.R.E.), services, and trade show strong negative correlation.