A Two-Year Study of the Lake and Wind Currents on Lake Erie Near Ashtabula, Ohio 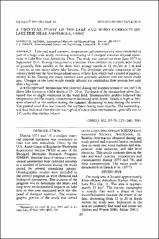 Lake and wind currents, temperature and transmissivity were monitored as part of a large-scale study involving monitoring of 2 dredged material disposal operations in Lake Erie near Ashtabula, Ohio. The study was carried out from June 1975 to September 1976. During this period at a location 4 km offshore the currents were found to generally flow parallel to the shore with average speeds of 12 cm/sec at 3 m and 5 cm/sec at one meter above lake bottom. The dominant periodic component of the velocity field was the first longitudinal mode of Lake Erie which had a period of approximately 14 hr, During the study currents were generally uniform over the entire study area. Changes in the local winds usually affected the established flow pattern but only after a lag time.