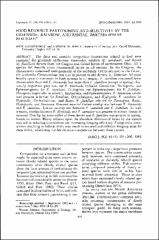 The diets and possible competitive interactions related to food were examined for greenside (Etheostoma blennioides), rainbow (E. caeruleum), and fantail (E. flabellare) darters from the Chagrin and Grand Rivers of northeastern Ohio. All 3 species fed heavily upon chironomid larvae in all seasons. In the Chagrin, the chironomids consumed were primarily of the subfamily Orthocladiinae; in the Grand, the subfamily Chironominae was also important to the darters. E. blennioides fed most heavily upon chironomids in both streams in all seasons. E. caeruleum consumed fewer chironomids than did E. blennioides but more than E. flabellare (except in spring). Seasonally important prey taxa for E. blennioides included Simuliidae, Trichoptera, and Ephemeroptera; for E. caeruleum, Trichoptera and Ephemeroptera; for E. flabellare, Plecoptera (especially in winter), Trichoptera, and Ephemeroptera. E. blennioides exhibited greatest selection for Simulium, Orthocladiinae, and Hydroptila; E. caeruleum for Hydroptila, Orthocladiinae, and Baetis. E. flabellare selected for Paracapnia, Baetis, Hydropsyche, and Stenonema. Greatest seasonal dietary overlap was between E. blennioides and E. caeruleum. Lowest overlap was between E. caeruleum and E. flabellare. In both streams, overlap between E. blennioides and E. caeruleum was greatest in winter, lowest in summer. Overlap between either of these darters and E. flabellare was greatest in spring, lowest in winter. Heavy reliance upon the abundant chironomid larvae by the darters may aid in reducing competition and increasing foraging efficiency. Competitive interactions resulting in habitat shifts may result in reduced and different foraging areas for these fishes, which may further decrease competition between these darters.