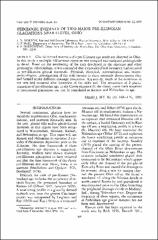 Glacial derived materials of a pre-Illinoian age rarely are observed in Ohio. In this study a multiple till/outwash exposure was sampled and analyzed pedologically in detail. Based on the weathering of the soils developed in the exposure and other geomorphic relationships, it was concluded that 2 episodes of soil formation had occurred in pre-Illinoian glacial materials. Physical, chemical, mineralogical and micromorphological investigations of the soils formed in these materials demonstrated they had formed under different drainage conditions. Apparently, much of the dissection in the area had occurred after formation of the older soil. The occurrence of 2 glacial sequences of pre-Illinoian age in the Cleves exposure fit the classic count-back sequence of continental glaciations and can be considered as Kansan and Nebraskan in age.