Records and Distributional Relationships of the Roanoke Bass, Ambloplites Cavifrons in the Roanoke River Drainage, Virginia 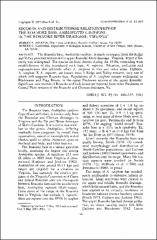 The Roanoke bass, Ambloplites cavifrons, is nearly extirpated from the Ridge and Valley province section of the upper Roanoke River drainage, Virginia, where it formerly was widespread. The species declined therein during the 1950s, coinciding with establishment of the introduced rock bass, A. rupestris. Siltation, pollution and impoundments also adversely affect A. cavifrons in this and other areas. Hybrids, A. cavifrons X A. rupestris, are known from 3 Ridge and Valley streams, only one of which still supports Roanoke bass. Populations of A. cavifrons remain widespread in Blackwater and Pigg Rivers, in the upper Piedmont section of the upper Roanoke. Significant new records of Roanoke and rock basses are reported from other Piedmont or Coastal Plain streams of the Roanoke and Chowan drainages, Va.