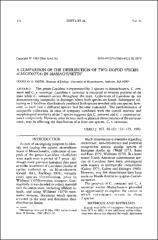 The genus Caecidotea is represented by 2 species in Massachusetts, C. communis and C. r. racovitzai. Caecidotea r. racovitzai is restricted to western portions of the state while C. communis occurs throughout the state. Collections of Caecidotea sp. are demonstratively unispecific in drainages where both species are found. Subsequent collecting in 2 localities that formerly produced both species revealed only one species; however, in each case a different species had become dominant. The predominance of unispecific collections in areas of sympatry combined with the overall meristic and morphological similarity of the 2 species suggests that C. communis and C. r. racovitzai interact competively. However, other factors, such as physical characteristics of the environment, may be affecting the distribution of at least one species, C. r. racovitzai.