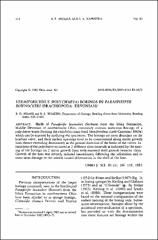 Shells of Paraspirifer bownockeri (Stewart) from the Silica Formation, Middle Devonian of northwestern Ohio, commonly contain numerous borings of a polychaete worm forming the endolithic trace fossil Vermiforichnus clarki Cameron (1969a) which can be exposed by acidizing the specimens. The borings are most abundant on the brachial valve, and their surface openings tend to be concentrated along major growth lines thence extending dominantly in the general direction of the beaks of the valves. Infestations of the polychaete occurred at 2 different time intervals as indicated by the spacing of the borings on 2 major growth lines with renewed shell growth between them. Growth of the host was severely reduced immediately following the infestation and in some areas damage to the mantle caused deformation in the shell of the host.