A Survey of Bats in Wayne National Forest, Ohio 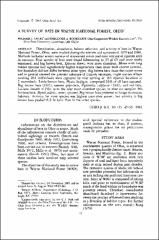 Distribution, abundance, habitat selection, and activity of bats in Wayne National Forest, Ohio, were studied during the winters and summers of 1979 and 1980. Methods included winter surveys of abandoned mines and mist netting of riparian sites in summer. Four species of bats were found hibernating in 23 of 65 coal mine shafts examined, and big brown bats, Epteskus fuscus, were most abundant. Mines with long tunnel systems had significantly higher temperatures than those with shorter systems, but humidity did not differ between mine types. Big brown bats chose the cooler mines and in general showed the greatest tolerance of climatic extremes. Eight species of bats totaling 261 individuals were captured by mist netting at 163 riparian locations in 5 watersheds. Little brown bats, Myotis lucifugus, comprised 56% of all bats captured. Big brown bats (14%), eastern pipistrels, Pipistrellus subflavus (13%), and red bats, Lasiurus borealis (13%), were the next most abundant species in mist net samples. No Indiana bats, Myotis sodalis, were captured. Big brown bats preferred to forage in forested habitats. Activity for most species was highest soon after sunset, but activity in big brown bats peaked 0.5 hr later than in the other species.